How Do I Communicate Better in the Office and My Workplace? Ask, Pause and Listen 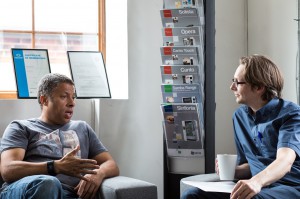 Note: This is the third in a series, encouraging connections between people in the workplace and the world.

I remember hearing a joke one time about a particularly self-absorbed young man who went on a blind date. Over dinner, he spent two hours providing the young women with detail upon detail about his life, his thoughts and his ideas. No questions about his date emerged. At some point, though, in a rare moment of introspection, he must have recognized that perhaps he had talked too much and too long. So he quickly asked, “Well, that’s enough of me talking – tell me what you think of me!”

Few leaders suffer from such poor communication skills, but many fall into the trap of failing to take the time to listen, to watch and to give space, so that the other person or the team can be invited into the conversation. They fail to open themselves up to being attentive.

It’s called attentiveness by some, the power of pause by others.

To some, pausing is the same as silence. And silence often terrifies most of us. Ever sit around the table at a meeting attempting to resolve a difficult problem? Individuals continuously come up with ideas, or excuses, or more questions. But when the conversation inevitably stops, giving everyone air to breathe and time to think, someone will usually intone the famous “It is what it is,” or something similar. While it is meant to keep the deafening silence at bay to make everyone feel as if they are not wrapped in defeat, it can actually keep us from deep thought.

There is another way to look at it. Silence gives time for thinking. Deep thinking. Daniel Kahneman in Thinking Fast and Slow (Farrar, Straus, and Giroux, 2011) in part describes it as “System 2 Thinking”.

Attentiveness and pause opens up possibilities, as ideas percolate in ones head and the other person allows them to emerge.

Try it the next time you are speaking with someone. Ask questions and be sure to pause after you ask each one. At first, you might have to silently count to yourself, but most clients find it better to just disclose, “I want to give you a little space to think about what I just asked. Give yourself the freedom to think, to contemplate, to ponder.”

Space doesn’t mean, “I’ll see you tomorrow,” because your very presence in the conversation provides the means and the protection for silence. A leader can build a safe container for an individual to be free to think before he or she speaks.

It takes some practice, but the time for thinking and the silence to do it in are powerful tools to come up with creative solutions and ideas.

Two people talking might not hear each other. But one listening and asking questions – filled with plentiful space and silence – can cause powerful connections to emerge between individuals.   And as those ideas emerge, further inquiry and more connection can occur.

“Tell me more,” gives permission. It gives space. And it is best followed by silence.

It works for coaches and it can work for you as you coach your own teams.

Dave Bushy is retired airline executive with a successful executive coaching practice. He holds a master in industrial relations from the University of New Haven.